Turns out, connecting three high resolution displays to a MacBook Pro 13” is a bit bothersome. Getting it just-so, total pain. Worth it.
27th September 2020, eight minutes to read
monitors
working-from-home
hardware

I’ve always liked large displays. Prior to The Distancing™ I was constantly going between meetings & my workspace, so one large 40” monitor sufficed to stop me from being hunched over a 13” laptop display at my desk. With work-from-home, I pined for mo’ monitor. I’ve never been able get into the groove with dual monitors though. With one dead-ahead, one to the side always felt lopsided. If you put one either side of the center, you’re staring at a seam all day; no thank you!

Obviously, the answer to this conundrum is to have three.

Update 23/03/2021: Updated to include details (see addendum at the end) on the new Thunderbolt Hubs that have gotten me to the single cable life!

Going for the triple

My work-issued laptop is a 2018 13” Apple MacBook Pro. In contrast to my love of large displays I prefer teeny laptops. This puts constraints on monitor count & resolution, especially when one is aiming for the holy grail of retina resolution (Sweet, sweet integral scaling factor).

No triple option! Maximum of two, and then they only go up to 4K. Yes, yes I know I could use the internal display in the middle, or on the side. But 13” is just weird slid between two 27” displays! Thats before you’ve thought about getting text & windows to display at the same physical size to avoid bloop — blip — bloop as the text & windows get ickle or ginormous as you drag things between displays.

But wait! The MacBook Pro has a trick up it’s sleeve — Thunderbolt 3 & eGPUs! With Thunderbolt 3 you can connect a GPU via an external enclosure, and then plug monitors into the GPU, and everything works great. Easy-peasy-lemon-squeezy!

Yes, I love large displays. But I also love crisp, beautiful text — I spend a lot of time staring at code, text documents, and chat messages. It’s so much easier on the eyes when that text is crisp & beautiful. To be specific: not just ‘high density displays’, but the ability to hit the Goldilocks scale factor of 2x. E.g. every effective pixel is two physical pixels. Simple maths, no half pixels, no rounding.

This leads to a very short shortlist of displays that hit the 218 PPI needed:

The 27MD5KA is very unique in that it’s not a DisplayPort / HDMI / USB-C Alt mode input, but Thunderbolt 3 (TB3). It must be connected to TB3 to receive input — and it turns out there are basically no graphics cards with TB3 output. There’s a real janky solution if you have a spare PCIe slot, where you use a special card (Alpine/Titan Ridge) that converts DisplayPort input to TB3 output (among other capabilities). But that requires a 2-slot enclosure, which don’t really exist.

To throw another spanner in the works, the 22MD4KA is USB-C only — it doesn’t have any other inputs. Thats solvable with a normal cable, since USB-C to DisplayPort is all the rage, yeah? Nope.

Turns out there are a lot of cables that are wired for USB-C output to DisplayPort input. But thats not what you need here — we’re going the other way. You need a bi-directional USB-C-DisplayPort cable. Luckily these aren’t expensive — but you do have to watch out to make sure the one you purchase is bi-directional.

Theres one more wrinkle — none of these displays have any physical controls. No power button, no input switching (only one input!), and critically no brightness control. This means you’re gonna be blinded in your nerd cave at 02:00 in the morning.

For the TB3 display, this is fine because it’s going to be directly connected to the laptop, thus full connectivity. But the USB-C displays would be connected to a GPU DisplayPort output, which, obviously isn’t USB-C. The 22MD4KA exposes the brightness control via USB rather than DDC. This means I’d need to connect the USB-C part of the display to my Mac somehow. But theres only one input — USB-C, which was already being fed by the DisplayPort-USB-C cable…

After much googling, and searching I came across this thread on eGPU.io, which broke down some of the detailed options for some of these displays. And there was one solution: a VR headset cable sold only in china.

This cable has 2xUSB-A & 1xDisplayPort on one end, and USB-C on the other — plug these into the right places, and magic would happen.

To recap: I needed to purchase one GPU, one eGPU enclosure, two very specific displays, and two rare cables. Here’s what I purchased in the end:

Lets, uh, not discuss cost. It should last a long time. Should.

Was it worth it?

Absolutely. There was a lot of research into both the how, and what to make this possible. Getting the displays was probably the hardest part — there were a few bids lost very narrowly for the displays on eBay — they’re very good displays, but very rare, which makes them cost almost the same as when they were new. I lucked out on a “Buy It Now”.

My laptop is now connected via two cables. One to the 5K display, which also has my keyboard, USB-A hub, and Ethernet adapters plugged in. Another to the eGPU enclosure with the GPU & 4K displays. I don’t unplug often enough that it’s really a problem. When I do want to switch it’s pretty easy: Disconnect the eGPU in software, change the cables, and bobs you’re uncle.

It’s been mostly stable, and had the added advantage of enabling 49-person Brady bunch support in Zoom.

There have been a couple of issues:

There has been one meaningful problem, and it’s related to the Razer Core X: It never turns off it’s PSU fan if there is a laptop connected, even when the laptop is asleep. It’s not a quiet (albeit not loud) PSU fan, which results in a noticeable hum when the room is quiet.

If I was doing this again, I would pick the Mantis Saturn Pro V2. Based on a review from eGPU.io, it’s great — and thanks to the team behind it being very responsive in the forums at eGPU.io, confirmed that the fan in the PSU is temperature aware.

Oh, wait, you probably want to see what it looks like: 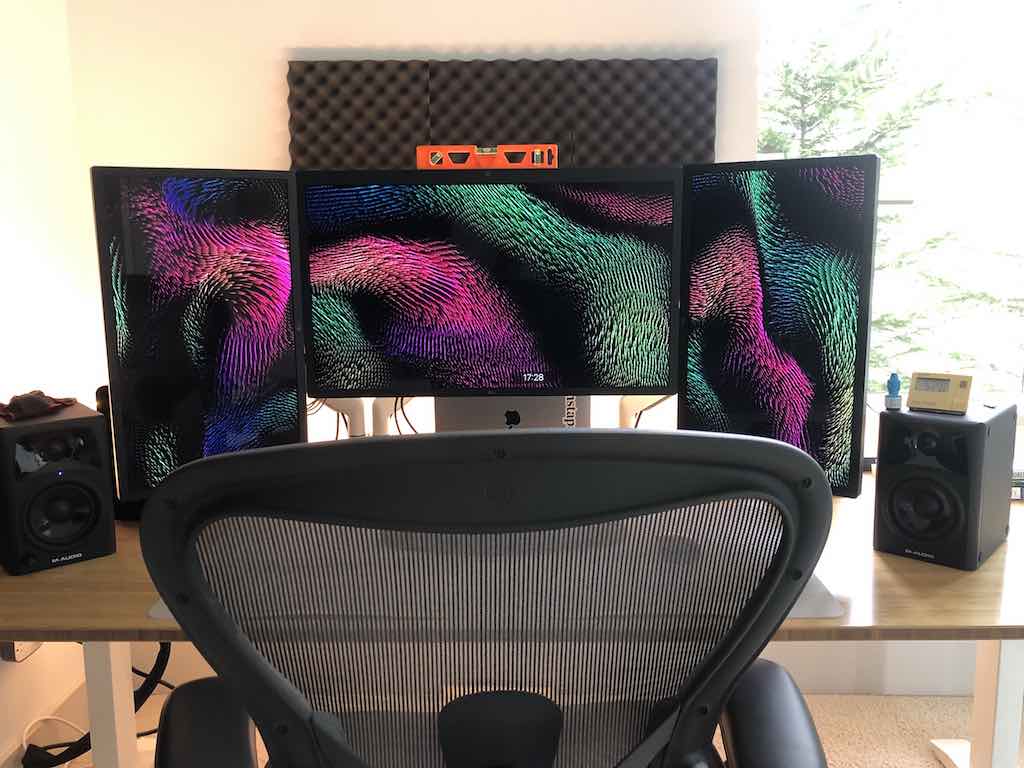 In late 2020, OWC (and others) released a new generation of thunderbolt hubs & docks, seemingly enabled by a new Intel Thunderbolt controller - Goshen Ridge. In conjunction with macOS BigSur 11.1, these enabled daisy chaining of TB devices reliably. While it kinda worked before eGPUs were very unreliable. There were very few TB devices that supported more than one downstream TB3 port — a requirement due to my LG 5K display.

With these new devices that had three downstream ports, and the updated macOS fully supporting it, I had to take another shot at the single cable life.

And it worked. Perfectly. Initially I’d picked up just the OWC hub not realising the Dock used the same chipset. After the hub worked great, I picked up the Dock with it’s integrated audio & ethernet got everything hung off a single thunderbolt cable. yasssssssss!